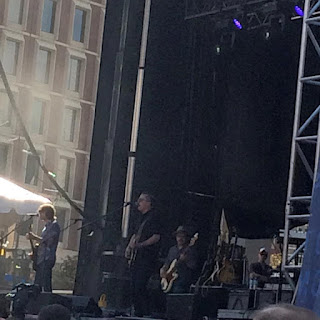 Wow. Jason Isbell seems to be EVERYWHERE these days. He'll be down in Texas for Austin City Limits in a few weeks, Newport Folk in July, four dates at Nashville's Ryman Auditorium in October that are already sold out, and this past weekend he was right here in town at City Hall for fifth incarnation of the bi-annual The Boston Calling Music Festival.

It was one of the hottest days of the year so far when Jason Isbell took to the Boston Calling Jet Blue Stage. He and The 400 Unit (Chad Gamble, Saler Vaden, Derry DeBorja, Jimbo Hart) played to a medium-sized crowd, but a loyal crowd singing along and keeping a beach ball afloat over their heads. Out of the corner of my eye I couldn't help but notice a cluster of four college kids. At the start of the set they had their backs to the stage and were having their own conversation, but by the end they were transfixed and swaying just like everyone else.

Isbell's set--opening with "Stockholm" off of 2013's Southeastern--was a steady blend of his solo material as well as tunes from the six years he spent with The Drive-By Truckers.  One such track was "Decoration Day" the title song from the Truckers record from 2003.The song tells the story of a generations-long feud between two families, and Isbell wrote it three days after joining the band. He was only twenty-two. Songs from his solo repertoire included "Travelling Alone", "Flying Over Water", and "Cover Me Up" among others. Of course he sprinkled some new songs in the set as well including "24 Frames" and "Speed Trap Town" from  Something More Than Free, due out July 17th.
he closed out the set, though, with The Drive-By Truckers' "Never Gonna Change" which he graciously thanked the crowd for loving.

-Kendall Stewart
Posted by WUMB Radio at 2:19 PM No comments:

This Saturday on Local Folk we take a deeper look at the tight knit and vibrant music scene of Northampton, MA. Despite a population of less than 30,000, the city consistently punches above its cultural weight. In addition to venues like the Iron Horse, Calvin Theater, and Parlor Room which attract top local and national talent, Northampton-based record label Signature Sounds has helped to shine spotlight onto a bevy of local artists like Lake Street Dive, Crooked Still, and Eilen Jewell.

One such artist is Heather Maloney, whose album Making Me Break was released in April by the label. After studying everything from classical Indian music to opera, Maloney spent years living and working in a silent retreat center in Central MA. She eventually channeled these experiences into a haunting debut solo release, followed by a self-titled album in 2013. Her latest record was produced by Bill Reynolds (Avett Brothers, Band of Horses) and builds on this foundation with an edgier and more textural sound.

The Sun Parade specializes in lush red-eyed pop tinged with the psychedelic American roots of artists like The Band and The Flying Burrito Brothers. The group’s latest release, a 2014 EP entitled Heart’s Out, has paved the way to a larger following and more touring opportunities, including with Lake Street Dive and fellow Northampton band And The Kids.

Like tour mates The Sun Parade, And The Kids share a love of jangly ear-catching arrangements. Led by the huge vocals of guitarist Hannah Mohan, the group takes simple ingredients and makes them transcendent by using insistently repeated vocal and melodic lines to create mesmerizing soundscapes that continually build and recede.

Despite a recent move to Nashville, Jamie Kent remains inextricably linked to the Northampton music scene. In addition to constant touring, Kent helped to found and book the Northampton Summer Music Series and other events that have helped build foundations for many of the acts that have followed in his wake. His most recent EP Embers & Ashes was described by Rolling Stone as “country soul channeling Townes Van Zandt”.

Posted by WUMB Radio at 1:16 PM No comments:

The Non-Commvention is an annual event, currently hosted at WXPN/World Cafe Live in Philadelphia, serving as a meeting of the minds for Non-Commercial radio stations across the country, record industry professionals, and music fans. The convention was founded in 2001 by Dan Reed at WFPK in Louisville, Kentucky and was brought to WXPN when Reed moved to the station in 2004. Now in it's fifteenth incarnation, Non-Comm consists of a balanced blend of industry panels and meetings as well as performances from both up-and-coming and well-established musicians from all over the world. The highlights from Non-Comm night one included Ryley Walker, Buffy Sainte-Marie, and Shelby Lynne. 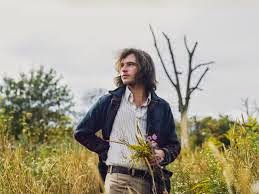 Ryley Walker is fresh off of an extensive European tour celebrating the March 31st release of his sophomore record, Primrose Green. It seemed as if everyone in the building had been told to absolutely not miss the Chicago native's set. It was impossible to get anywhere near the PRX stage, people were crammed in so tightly. Maybe it was the intimacy of his performance--he was performing sans his  backing band--or simply the urge to see the twenty-five-year-old's fingerpicking style in real life, but the crowd was pulled toward him with magnetic strength. 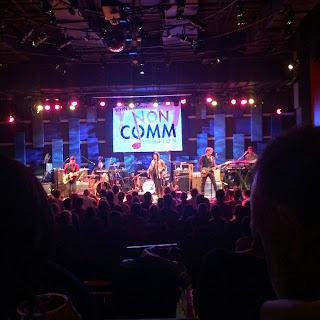 Canadian-American Cree singer-songwriter, social activist, musician, pacifist, composer, and visual artist Buffy Sainte-Marie, a legend with over two dozen albums under her belt, is seventy-four years old and one would have no idea. Sainte-Marie's catalogue focuses on the issues of the Indigenous peoples of the Americas, as does her latest album, Power In the Blood. Her performance was dynamic and energetic, sporting a blonde streak in her black hair and a fringe jacket that inspired fashion designers to name entire products after her, she powered through a set that I overheard being referred to as "folk metal". 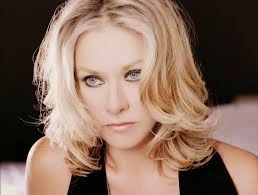 This
year marks the fifteenth anniversary of I Am Shelby Lynne--the record that earned her the Grammy for Best New Artist--and she is still going strong. Her distinctive contralto voice was soothing, powerful, moving and so much more. Though she founded her own record label, Everso Records, Lynne has recently joined the Rounder Records roster. It was through Rounder that her seventh album, I Can't Imagine, was released last week. 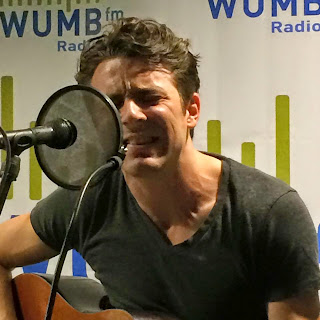 Singer-songwriter Joe Pug dropped by the station on April 30th, ten days after his 31st birthday and just a few weeks after the release of his third album, Windfall. Pug had visited the station previously while promoting 2012's The Great Despiser, a tour that nearly burnt him out on making music altogether. After kicking the session off with "Bright Beginnings", the first track from the new record, he went into detail about how he almost quit music entirely. He had been touring non-stop and by the end of the tour he was "really low on [him]self, low on music" and wanted to take a step  back in order to gain perspective as he "needed to have joy while making music". (Though let's not forget his gorgeous rendition of Bruce Springsteen's "Downbound Train" on Dead Man's Town A Tribute To Born In The USA from 2014.)

"If Still It Can't Be Windfall the whole way through.
Found"was the second tune he played, which he wrote on an out-of-tune piano he found on Craig's List. He found a section of the site dedicated to people with pianos they are trying to get rid of--if someone can get it out of their house then it's theirs. The track is particularly powerful and Pug strategically placed it last on the album. "People don't listen to full albums anymore", and he wanted to make sure people listened to

Windfall was recorded at Shangri-La studios, with a simpler approach to songwriting and recording than Pug's previous efforts. He also cites more contemporary influences on this album as well--M. Ward, Josh Ritter and Ryan Adams among others, and finishing out the performance with "Burn And Shine".

Joe Pug will be supporting Brandon Flowers in the UK next month, as well as performing at the Green River Festival on July 12th, and Newport Folk on July 25th (Friday). More information can be found at JoePugMusic.com.
Posted by WUMB Radio at 11:35 AM No comments:

Local boys, Tall Heights, stopped by the studio on April 25th to chat with Dave about their currently unnamed forthcoming album. The duo, Paul Wright and Tim Harrington--both currently sporting ponytails--grew up together in Sturbridge, Massachusetts and in 2008  began busking, playing covers in Faneuil Hall.

Wright is a classically trained cellist, playing his grandmother's cello. She passed away when he was just 5 years old. He first tried to play her cello at the age of 8, but found that the instrument was too big for him, "I grew into it in high school". Now he runs the cello with reverbs which, he says, allows him to "play with more colors". Harrington on guitar stated that they both have memories of writing poetry when they were small children and that that now influences their songwriting. They have also been known to lock themselves in cabins for twenty-four hours and refusing to leave until they've written songs.

While in-studio they played four songs including "Spirit Cold" for which a video was just released. They also performed "Back To Autumn" was written for Wright's grandfather and Harrington's grandmother. Wright's grandfather, a classical pianist, passed away at the age of 100, and Harrington's grandmother passed away exactly one year and one day later.

The new album was recorded in the home studio in the spare room in Harrington's apartment in Somerville and will be pressed to vinyl  and will also be available digitally. It will not be released on CD, however, because as Harrington says "CDs are a completely locked box that [people] don't have the key to," they believe that CDs are no longer accessible to people. More information can be found at TallHeights.com

Posted by WUMB Radio at 2:45 PM No comments: