WUMB Member Screening: Another Day, Another Time: Celebrating the Music of Inside Llewyn Davis 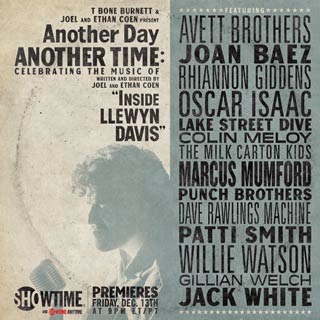 Over the weekend WUMB hosted a screening of the film Another Day, Another Time: Celebrating the Musice of Inside Llewyn Davis for our members. Inside Llewyn Davis is a film by the Coen Brothers starring Oscar Isaac, Carey Mulligan, John Goodman, Garrett Hedlund, F. Murray Abraham, and Justin Timberlake. The movie is set in 1961 and chronicles a week in the life of a struggling folk singer named Llewyn Davis.

Another Day, Another Time: Celebrating the Music of Inside Llewyn Davis is a concert film directed by Christopher Wilcha, of the concert by the same name--organized by T Bone Burnett who collaborates with The Coen Brothers quite often--in September 2013 at New York City's Town Hall. The film includes performances by Jack White covering Tom Paxton's "Did You Hear John Hurt", Rhiannon Giddens, Elvis Costello and Marcus Mumford, also of The New Basement Tapes, Locals Lake Street Dive with their own "You Go Down Smooth" and The Milk Carton Kids among others.

If you would like to attend WUMB Member Concerts you can become a member today here or by calling the membership office at 617-287-6902.
Posted by WUMB Radio at 10:18 AM No comments: 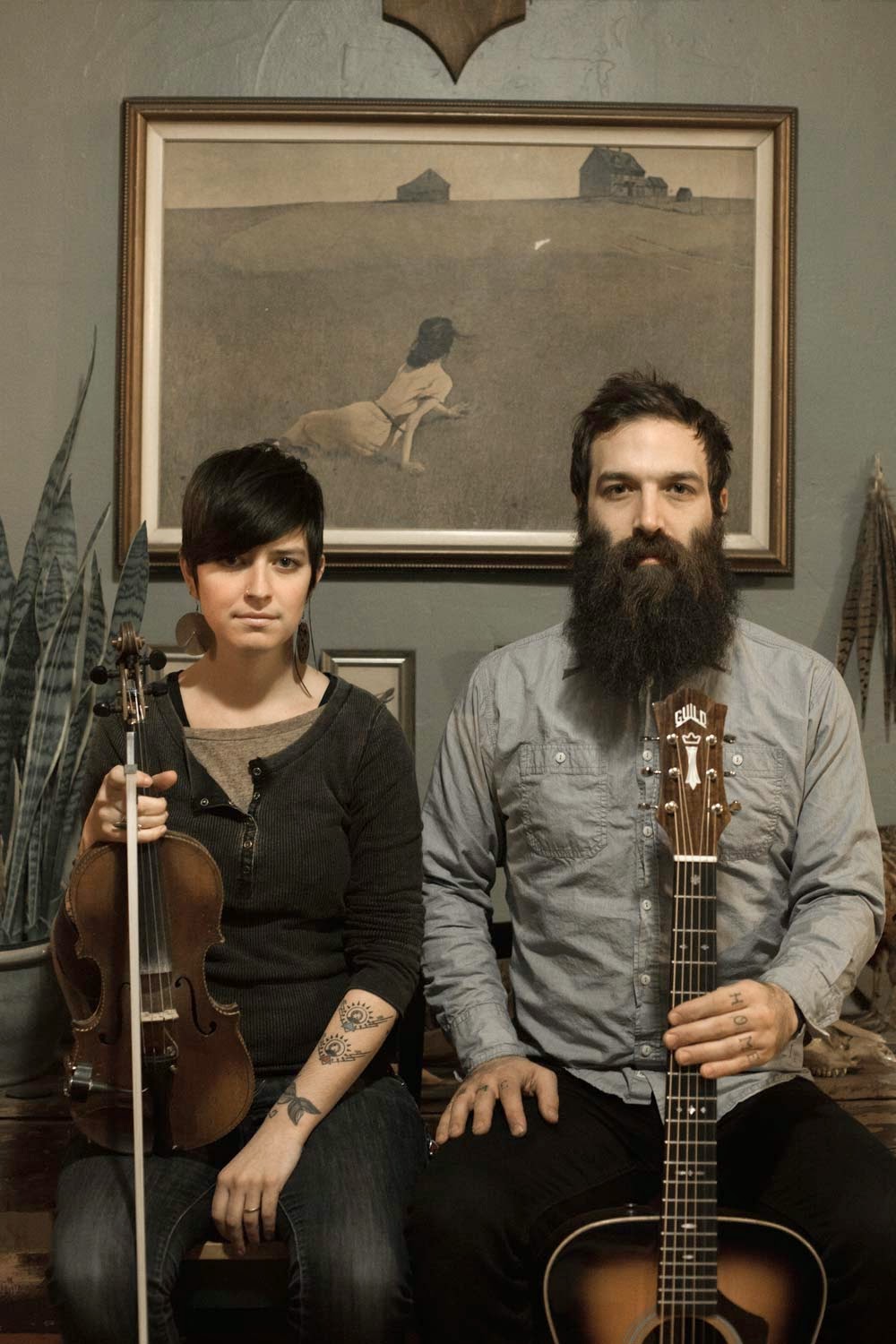 This Saturday on Local Folk we celebrate the release of Axis Mundi, the final studio album from Rhode Island duo Brown Bird, by spotlighting the flourishing music scene of Providence, RI.

Brown Bird founder David Lamb released albums as far back as 2003, but it was not until the summer of 2008 when a chance encounter with MorganEve Swain led to full blown partnership musically and otherwise(the two would eventually marry). Together the pair organically wove elements of folk, psych rock, Balkan and gypsy grooves, while touring and recording relentlessly. That process was abruptly cut short in May of 2013 when Lamb was diagnosed with an aggressive form of leukemia, to which he would eventually succumb in April of 2014. A year later, the final recordings (many of which were undertaken during Lamb’s treatment) are being released as the album Axis Mundi, named for the place where heaven and earth meet.

If 2008 was the genesis of Brown Bird’s wildly inventive sound, it was also a breakout year for another Providence group that insistently pushed past folk-rock labels. That year The Low Anthem released their third album Oh My God, Charlie Darwin, which would eventually be picked up by Nonesuch Records leading to performances at festivals like Bonnaroo, Lollapalooza, and Austin City Limits. 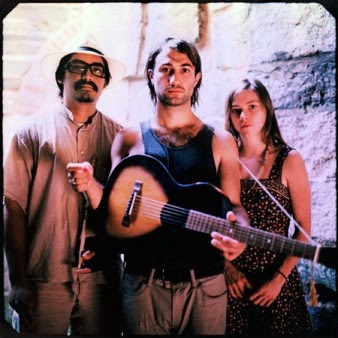 Although currently touring less, members Ben Knox Miller and Jeff Prystowsky, and Bryan Minto, continue to channel the group’s DIY ethos (the band would famously dumpster dive for cereal boxes to hand cut and silk screen for their first CD covers) with the opening of the Columbus Theater and Cooperative . The theater, originally built in 1926, had fallen into disrepair by the mid-2000s. Following extensive rehabilitation it was opened under the direction of the co-op in 2012. Since then it has been critical in raising the profile of Providence artists as well as showcasing performers like Charles Bradley, Juliana Hatfield, and Hurray For the Riff Raff. Says Columbus programming manager Tom Weyman, “We want the Columbus to be the bloody beating heart of Providence's music scene, unpolished, where art is created and performed, and where musicians are inspired to do their best work.”

Following the breakout success of groups like The Low Anthem and Brown Bird, there has been a rise in the regional and national profile of Providence artists like Joe Fletcher (recently departed to Nashville), The Silks, Smith&Weeden, and many more. Tune in this Saturday to Local Folk to hear just a few examples of the artists who have contributed to this rise as well as those who are positioned to continue building the city’s reputation in New England and beyond. 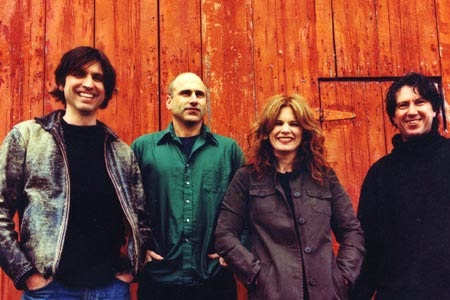 Every weekday at 8 PM is Then and Now with Brendan Hogan. This is when Brendan plays a set of songs back to back from the same artist emphasizing the beginning and the current status of their career. Tonight he will be playing "Walkin' After Midnight" and "We Are The Selfish Ones" from Cowboy Junkies.

Margo Timmins, Alan Anton, Peter Timmins and Michael Timmins founded Cowboy Junkies in Toronto in 1985. They released their debut record, Whites Off Earth Now!!--produced by Peter Moore and recorded in their family garage--the following year. The band gained notoriety, however, this their 1988 sophomore release, The Trinity Session, recorded on a single microphone at The Church of The Holy Trinity in Toronto.

Walkin' After Midnight: The Trinity Session is comprised of a mixture of covers and original material. "Walkin' After Midnight" is a cover of the song performed by Patsy Cline and written by Donn Hecht and Alan Block. The songs on The Trinity Session were inspired by the music the band heard while The South on the U.S. leg of their Whites Off Earth Now!! tour. It was producer Peter Moore who suggested recording in the church because of the natural reverb in the building. The band referred to themselves as The Timmins Family Singers and said that they were recording a Christmas Special in order to gain access to the building.

We Are The Selfish Ones: "We Are The Selfish Ones" is taken from Volume 4: The Wilderness of The Nomad Series, box set from 2012. The Nomad Series is a four disc box set spanning an eighteen month cycle between 2010 and 2012 . Each disc displays a different style of the group, Volume 1, Renmin Park, shows their experimental side, Volume 2: Demons is comprised of all Vic Chesnutt covers, Volume 3: Sing In My Meadow is more fun and boisterous and The Wilderness serves as the introspective, atmospheric one. 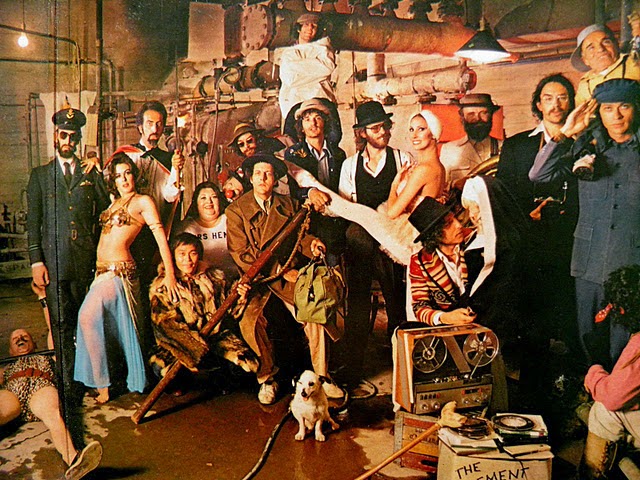 Every day at 5:30 PM Albert highlights songs spanning Bob Dylan's career from deep cuts to collaborations, to recent recordings. Today he is featuring "Tears of Rage", "On The Road Again", and "Forever Young (Live)" from The Last Waltz.

Tears of Rage: "Tears of Rage"--melody by Richard Manuel and lyrics by Bob Dylan--was recorded both by The Band on Music From Big Pink  and Bob Dylan and The Band on The Basement Tapes. Considered one of the most celebrated tracks from The Basement Tapes, it was in fact first recorded in 1967 during rehearsals at Big Pink, The Band's house in Upstate New York with The Band backing Dylan on lead vocals. This version of the song was widely bootlegged but wasn't officially released until The Basement Tapes in 1975. The non-Dylan version with Richard Manuel on lead vocals, however, was featured on The Band's Music From Big Pink in 1968. The song has since been recorded by various artists including Joan Baez, Jimi Hendrix, Jerry Garcia and Gene Clark.

On The Road Again: Produced by Tom Wilson--the famed produced who also worked with such acts as The Velvet Underground, The Mothers of Invention, and Simon and Garfunkel among others--and recorded in January, 1965, "On The Road Again" is featured on the electric first side of Dylan's fifth studio album, Bringing It All Back Home. The record is separated into two sides: the electric side and the acoustic side. On the whole Bringing It All Back Home, continued to distance Dylan from the folk community as on the electric side he had a rock band backing him and the second song featured more personal lyrics than the protest songs he was known for. It was also the first of Dylan's albums to break the Billboard Top 10, peaking at number 6.

Forever Young (Live): This track originally was featured on Dylan's 1974 album, Planet Waves, in both a slow and a fast version. The record--Dylan's fourteenth--was also a collaboration with The Band and was supported by a reunion tour beginning a few weeks before its release. It was originally slated to be titled Ceremonies of The Horsemen, a callback to the track "Love Minus Zero/No Limit" off of Bringing It All Back Home, but Dylan chose to change the title at the last minute, delaying the album's release. This version is a live recording, on November 25th, 1976, from what was supposed to be The Band's final show. Other guest performers included Eric Clapton, Paul Butterfield, The Staple Singers, Neil Young, Bobby Charles, Emmylou Harris, Neil Diamond, Ringo Starr, Ronnie Wood, Ronnie Hawkins, Muddy Waters, Dr. John, Van Morrison and Joni Mitchell. Martin Scorsese filmed the concert for a documentary of the same name, which came out in 1978.
Posted by WUMB Radio at 8:49 AM No comments: 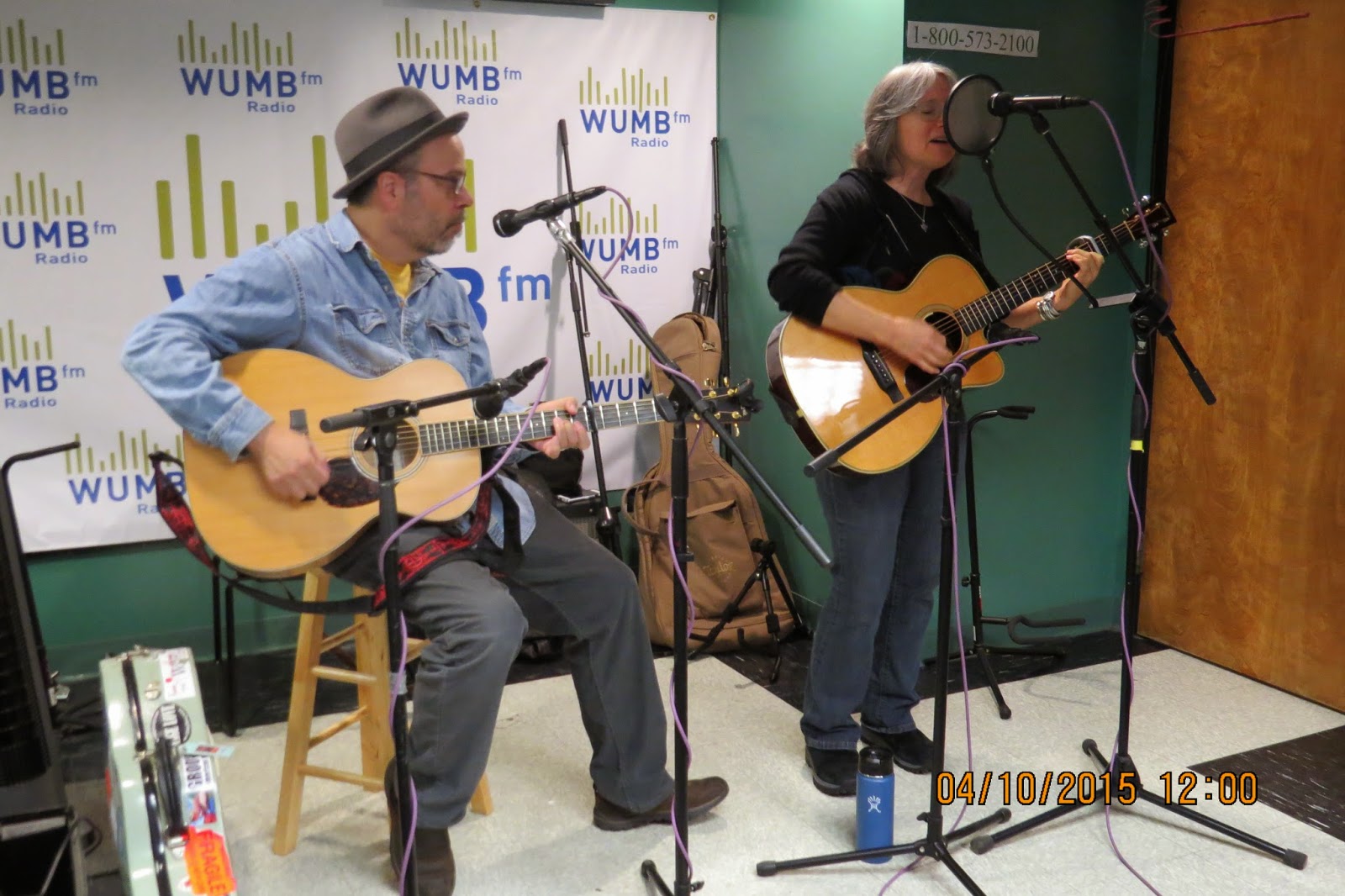 Husband and wife duo Claudia Russell and Bruce Kaplan celebrated their twenty-fifth wedding anniversary just a few days ago. "This is our Silver Anniversary" Russell joked when they stopped by the station for an in-studio session and interview with Dave on April 10th, performing a set that included "You Are The Light", a song that they had meant to perform at their wedding. The two met when their individual bands booked a gig at the same club and entered into not only a life partnership, but a musical partnership as well. "Most couples argue about money and the house, we argue about song keys," Kaplan laughed.

The first song in their set was "Pirate Girls", coincidentally the opening track on their latest album All Our Luck Is Changing. It describes an intimate friendship between two young girls prior to one moving away--painting a picture of large backyards and summer days spent outside until dark. Both are images from Russell's childhood, though not describing a single friendship of hers but bits and pieces from many, "a conglomeration, like bringing different bits of clay together". Kaplan, who co-wrote the song--stated that though he only wrote two lines, he did have two close friends who moved away in his childhood and that feeling is what the song evokes for him.

"This song is arguably a jig," Kaplan said as the duo launched into their second tune "Follow Your Tail Lights Home", also from All Our Luck Is Changing. Peter Case, whom Kaplan had known since 1979. Russell had taken two of his songwriting classes as well. Describing the process they said, "Peter is kind of a beatnik... he always gives 110%."

Russell and Kaplan closed out the set with "I Remember The Wind". They perform at The Linden Tree Coffeehouse in Wakefield tomorrow, April 11th, and Club Passim at 3:30 PM Sunday, April 12th. More information can be found at ClaudiaRussell.com.
Posted by WUMB Radio at 3:20 PM No comments: The entirety of Session Americana was represented in-studio at WUMB on March 31st by four of its members; Ry Cavanaugh, Jim Fitting, Laura Cortese, and Dinty Child. They kicked off their set with “All For You”—a co-write between Cavanaugh and Dietrich Strauss—from their latest record Pack Up The Circus featuring Cavanaugh on vocals, Fitting on harmonica, Cortese on fiddle and vocals and Child on accordion.

Pack Up The Circus, the band’s 9th overall release, was created partially utilizing the recent phenomenon of online crowd-funding campaigns. The band self-funded the album as much as they could before turning to crowd-funding—which they see more as pre-sales than anything else—recording the majority of it in three days. It also features many guest performers who had toured with the band members in the last few years.

Anais Mitchell who had worked with the band off and on for five years or so, and was the first person to bring the band to perform out of town when they opened for her and served as the “shepherd” of the group, guiding them along and finding the ability to mesh all of the “strong personalities in the room”.

Pack Up The Circus is currently available. More information on Session Americana can be found at SessionAmericana.com.
Posted by WUMB Radio at 6:30 PM No comments: