Rayland Baxter is the son of Bucky Baxter, the multi-instrumentalist from New Jersey who has played with the likes of Steve Earle and Bob Dylan and even on Rayland's own records, but the younger Baxter, himself didn't pick up a guitar until the age of twenty. A Lacrosse player in college, he tore both of his ACLs in two years, and it was that which led to his current music career, from Tennessee to Colorado and Israel, and his stop at the WUMB studio on July 28th. He has a laissez-fair attitude and abides by, "natural progression, knowing when to let go and just go with the flow".

Joining Baxter were two out of the four other musicians in his band, Matt Musty on drums and Nick Bennett on guitar. The trio began with "Yellow Eyes", the lead single from the forthcoming record Imaginary Man. From there they played a song inspired by a trip to Detroit,"Mr. Rodriguez", also from Imaginary Man, dropping August 14th. They closed out the set with a cover of Neil Young's "Vampire Blues".

More information on Rayland Baxter can be found on his website RaylandBaxter.com  or in the adjacent video, "Who Is Rayland Baxter", which he refers to as being "kind of like MTV cribs".

Madisen Ward & The Mama Bear, the mother and son duo from Kansas City, have been winning hearts wherever they go and Saturday afternoon at The Newport Folk Festival was no different. A small table with LED candles was placed between two chairs in the center of The Harbor Stage, giving it the homely feel of your own living room. The full crowd--audience members were packed together both seated and standing--began applauding as Ruth and Madisen Ward walked onto the stage and took their seats on either side of the table. Then Ruth sang to check her mic and they cheered. The countdown was one minute until their set was slated to begin when Ruth said:

"While we're waiting on our one minute I want you to know it's beautiful here. This place puts the 'B' in beautiful. I am enjoying it so much it's like it's giving back to me. This place is breathtaking."

Keeping with the theme Madisen and Ruth started their set with "Live By the Water" with Ruth winking at the allusions to surroundings like theirs in that moment. Madisen spotted fellow Kansas City natives in the crowd sporting KC gear just so he would notice them, referring to them as "friends from home".

It was their first time playing the Newport Folk Festival and their first time ever in Newport. Ruth described what an honor it was to be asked to play before their record Skeleton Crew was even released, and that they "couldn't be more honored to be here with the heavyweights of the past like Bob Dylan and Neil Young."

Songs like "Daisy Jane" and their cover of Fleetwood Mac's "Dreams" garnered applause before they were even over, artists like Jose Gonzalez watched from the side of the stage and everyone began cheering from the first note of their lead single "Silent Movies". 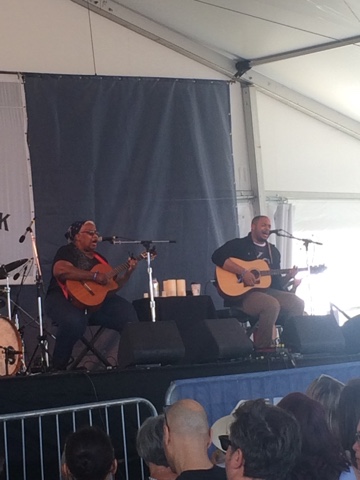 Posted by WUMB Radio at 9:04 AM No comments:

Joe Pug was the second artist to grace the Newport Folk Festival Harbor Stage at noon on Friday, July 24th. But his set was no typical early-in-the-day performance.

Pug was joined on stage by upright bassist, Matt Schuessler, and Greg Tuohey on electric guitar. Both Tuohey and Schuessler are members of Pug's Hundred Mile Band and play on his latest release, Windfall. The trio appropriately began with "Nation of Heat" and "I Do My Father's Drugs" off of Pug's 2009 debut EP also titled, Nation of Heat.

And then he brought a third musician to the stage: Rose Guerin of Vandaveer. Guerin is a resident of Martha's Vineyard, which was what inspired Pug to ask her to play with him. It was also her birthday. Tragically, her house burned down a few weeks back. Pug called her to say that obviously she would not have to play at Newport with him if she didn't feel up to it. He r response?  "Joe, looking forward to playing Newport on my birthday is the only thing keeping me going." The first song they performed together was "Burn and Shine" and Guerin stayed on that stage until Pug's final tune.

Pug's sarcastic sense of humor permeated throughout the set, jokingly referring to Windfall as their "blockbuster new album". "This next song is about as incongruous to a place as you can get," he began. "We tried to play all our upbeat material 'cause it's such a beautiful day. But it turns out 90% of our [stuff] is really dark." The crowd laughed with him as he broke into "The Great Despiser".

Rose Guerin was not the only guest musician to appear during the performance. MorganEve Swain, one half of Brown Bird, jumped up on fiddle just for "Call It What You Will". In what was arguably the peak point of the set she and Tuohey engaged in a solo battle with Pug egging them on with "it's so nice I gotta hear it twice!" And "you call that a solo battle? Now that's a solo battle!" When they were done Pug turns to the audience and said, "That just made me think of that part in Zoolander when Will Ferrell is like 'They're break dance fighting!' In case you wanted to know what was going through my head..."

"Speak Plainly, Diana" brought Pug and co. to the home stretch. "We play a lot of festivals, and we usually play around this time which means we're usually playing to a food truck vendor. It really is a testament to the greatness of the Newport Folk Festival that so many of you are out listening to music this early."
Hopefully he realizes that it's a testament to the greatness of his musicianship as well. 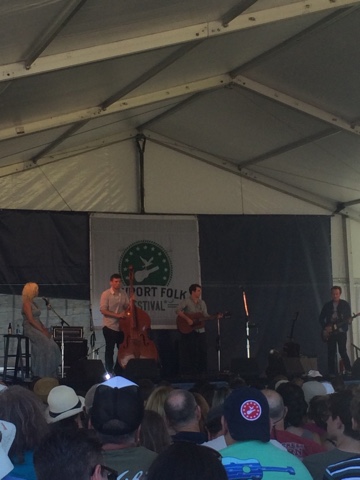 Posted by WUMB Radio at 8:31 AM No comments: 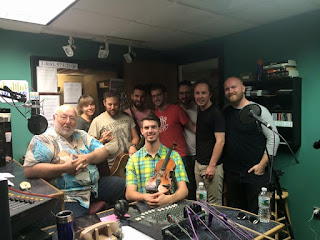 The eight-piece "American roots orchestra", "string band with horns", "horn band with strings" The Dustbowl Revival clustered together in the WUMB air studio on July 17th for an in-studio performance and interview with Dave. Breaking immediately into "Ballad of The Bellhop" from their fourth and latest record, With A Lampshade On, the close proximity made it even easier for the eight of them to feed off of each other's energy.

The band began when guitar and vocalist Zach Lupetin first moved to Los Angeles from Chicago. He put out a Craigslist ad for other musicians and "accidental evolution" occurred. Many musicians came out, some stuck around including trombone player Ulf Bjorlin who joked, "I'm one of the original members," dropping his voice down for effect, "just want to get that out there." He and trumpet player, Matt Rubin, play without charts. "I used to chart everything," Bjorlin said, "but then I left them at home on the way to a gig and realized I didn't need them. Now we play everything by heart." A theme running through the band members is that for the most part they were classically trained in their instruments and then learned and picked up other styles along the way. Fiddler Connor Vance, for example, has recently been learning how to play in a mariachi style and Daniel Mark started as a classically trained violinist before picking up the mandolin.

Liz Beebe who plays the ukulele and the washboard, took the lead on vocals for "Never Had To Go" also from With A Lampshade On. Most of the album was recorded live, which is also how they like to put the final touches when writing songs. Lupetin writes most of the song and then the band tests them out at "shows where no one is listening, so they're ready for the shows where lots of people are listening," he said as a perfect lead-up to "Bright Lights".

The Dustbowl Revival are playing at Regattabar at the Charles Hotel in Cambridge tonight. More information can be found on their website DustbowlRevival.com. 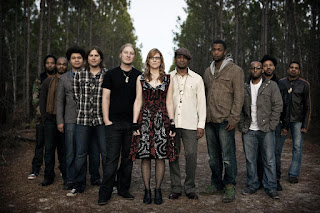 Tune in every morning from July 13th to July 17th when Brendan Hogan will be giving away tickets to see The Tedeschi Trucks Band at the Blue Hills Bank Pavilion on July 22nd!

Husband and wife duo Susan Tedeschi and Derek Trucks serve as the leaders of the Tedeschi Trucks band. The group formed in 2010 as the Derek Trucks and Susan Tedeschi Band in Jacksonville, Florida--the couple putting their solo bands on hiatus to do so. They wrote songs in their home studio and made their debut at The Savannah Music Festival on April 1, 2010. Tedeschi and Trucks changed their band name to The Tedeschi Trucks band in March of 2011 and released their first record, Revelator, on June 7th of that year. Revelator went on to win the Best Blues Album Grammy at the 54th annual Grammy Awards. In 2012 The Tedeschi Trucks band released their live album, Everybody's Talkin' and their second studio album, Made Up Mind, in 2013.

Listen for your chance to win tickets between 6 AM and 10 AM Monday, July 13th through Friday, July 17th!

-Kendall Stewart
Posted by WUMB Radio at 12:35 PM No comments:

WUMB Album Of The Month: Jason Isbell, Something More Than Free 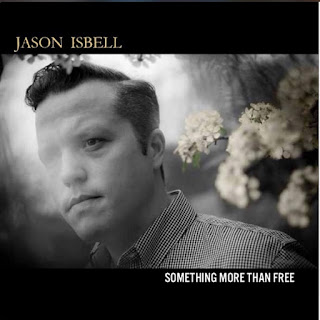 Here at WUMB we have started a new tradition of a monthly Album of The Month on-air giveaway. This month we are giving away copies of Jason Isbell's forthcoming album, Something More Than Free.

Something More Than Free is Isbell's fifth solo album(Isbell is a former member of Drive-By Truckers) and second released on his own label Southeastern Records. The record was produced by Dave Cobb who also produced Isbell's previous release, Southeastern. Something More Than Free with a full band at The South Emporium in Nashville Tennessee and features the themes of anticipation and celebration for the upcoming birth of his and his wife Amanda Shires' first child, due in September.

He is currently on tour through February of 2016 and recently played the Boston Calling Music Festival right here at our very own City Hall Plaza.

Something More Than Free drops on Friday, July 17th. We will be giving away copies all next week, the week of July 13th. Tune in to 91.9 in and around Boston or stream us online at WUMB.org for your chance to win!

More information on Jason Isbell can be found at http://www.jasonisbell.com/.

-Kendall Stewart
Posted by WUMB Radio at 10:41 AM No comments:

This weekend WUMB will be at the 20th Annual New Bedford Folk Festival on both Saturday and Sunday! And Dave Palmater will be hosting on The Whaling Museum stage! We will have a booth so come say hi to us! 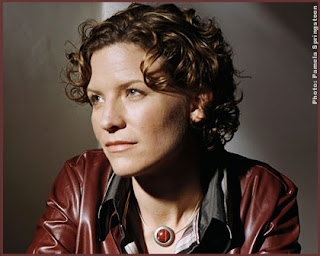