Live in studio with Martha Scanlan

I was lucky enough to be filling in on the air for Albert O on Thursday August 15th, 2019.  Lucky to get into the start of the 50th anniversary of Woodstock?  Yes, a little.  And I did sign off with Arlo Guthrie’s “Walking Down The Line” from that first night of Woodstock in 1969 – which included Arlo’s famous reference to the larger-than-expected crowd in saying “the New York Throughway is closed, Man!”  Why was that surprising, considering the incredible line-up?  Let’s consider that some of those legends were not yet well known, let alone “legendary” (Santana, for example).


In that spirit, I was certainly lucky to be at WUMB that day to interview Martha Scanlan and her guitarist Jon Neufeld.


It’s a funny thing about music.  For most people, if it’s not well known, it’s not worth their time.  And then there are pieces of music that just slip into you, regardless.  You could be barely conscious of their presence because of how they simply become a part of what you are doing while listening to them.  Walking, driving, sitting on the porch overlooking the sunset.  Martha Scanlan’s music inhabits that space.  A good way to explain that came from Martha herself during our session.  To paraphrase her, she talked about how everything has a rhythm.  “The rhythm of places” is a phrase that comes up in her online bio at MarthaScanlan.com.  As she talked about her music, that phrase made more and more sense. 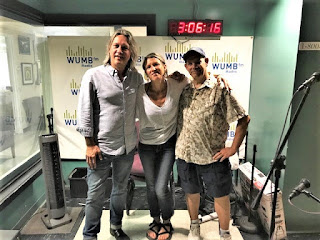 Martha’s musical collaborator for many years now, Jon Neufeld, certainly contributed to that.  During the session, I caught myself thinking how Jon’s playing slipped into the background.  And then suddenly he would have these compelling lead guitar parts.  He came off as one of those guitar players who without a doubt is all about serving the song.  There’s much talent but little ego in his demeanor.  It was nice of Martha to plug Jon’s website as well as her own (neufeldjon.com).  Jon noted just a little that he was in Black Prairie, the side project of many of The Decemberists.  I was tempted to ask Jon about his guitar style being similar to David Rawlings, but decided not to in deference to this being Jon’s showcase.  Later that night at their gig at The Burren, I did approach Jon about that.  He related it partly to the type of guitar they both play.  If you know guitars, I wish you’d been there with me for that conversation.  But Jon did seem happy that someone else could talk about that style of picking and about the Rawlings connection.


When we have guests in studio, generally they play three songs from their newest release.  Martha and Jon played songs from throughout their catalog.   They started with “Las Cruces” from the most recent album, The River and The Light, released last October.  Next was “Honey Blue” from Feb 2018’s The Shape of Things Gone Missing, The Shape of Things To Come (and one of my favorite album titles…I forgot to mention that to Martha).  And they finished with “Guardian Angel,” which comes from the Feb 2011 EP Tongue River Stories: Autumn.  I recommend all these songs for a long drive through rolling hillsides and ocean/lake views.


Remember that if you are a member of WUMB, you will have access to whatever we post from our in-studio sessions.  So if you are thinking of becoming a member, you can take care of that at wumb.org (hit the “Donate Now” button and follow the steps from there).  Then search for Martha Scanlan and Jon Neufeld, in studio 8/15/19.


Thank you, Martha and Jon, for a terrific in-studio session.  And thank you, dear reader, for your support of WUMB! 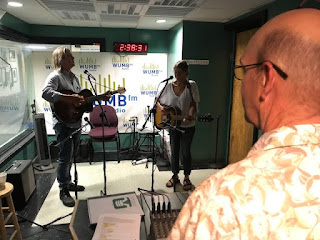