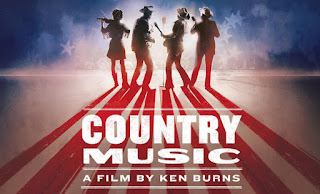 Having been a fan of Ken Burns’ PBS documentary series The Civil War in 1990 and Baseball in 1994, It does not surprise me that I really enjoyed the first episode of his new multi-episode documentary for PBS, Country Music.  I had figured that - especially in the first couple episodes at least - Burns would show many of the connections between Country Music and its cousins Folk and Blues.  Episode 1 did not disappoint in that regard, although perhaps there will be more of a Bluegrass connection illustrated in future episodes (certainly Bluegrass cross-pollinates with Folk and Country). 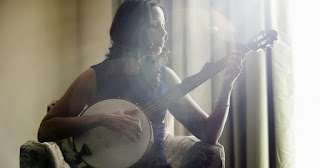 The sections dominated by text and Peter Coyote’s narration were nicely balanced by interviews.  A friend and I had speculated that with Country music, Charley Pride would be the only Black artist interviewed or profiled.  That was disproved quickly, as the link with slaves both freed and captive was clearly made with the development of Country Music via the banjo, for example.  One of the bands that has helped educate us on where the banjo came from was the Carolina Chocolate Drops.  Fittingly - along with people like Merle Haggard, Kathy Mattea, and Dolly Parton - Rhiannon Giddens (formerly of the Carolina Chocolate Drops) was an oft used interview in this first episode.  Ketch Secor of Old Crow Medicine Show was a nice surprise as an interview subject.  He did an excellent job not only of talking about some of the important players in the music’s development, but he also illustrated some of the discussion points with fiddle playing.  Wynton Marsalis and Marty Stuart, both of them virtual music historians in their careers, were also informative interview subjects.   And on the creative production side, it was nice how sometimes a song in the background from a narrative section continued into an interview segment, with the artist being interviewed singing a line from the same song as it continued in the background.  Sometimes they synchronized perfectly (for example, Merle Haggard singing a line from Jimmie Rodgers’ “Muleskinner Blues”).

The episode also did a good job of illustrating the influence on Country music by immigrants from other nations bringing instruments and traditional ballads from their native lands.  “Barbry Allan” from the British tradition is a prime example sited in the show that still speaks to artists today.  But back to Jimmie Rodgers, it took about halfway through this first episode for the story to get to The Carter Family and then Jimmie Rodgers.  These two then dominated the rest of the episode.  If you’ve ever listened to WUMB’s Folk Tales with Scott Alarik (Saturday’s at Noon) and The Dixie B-Line with Jon Gersh (Saturdays from 9pm to Midnight), you are not surprised.  In fact, the day before this premiere of Ken Burns’ Country Music aired, Scott Alarik covered much of the AP Carter/Carter Family territory.  This episode of Country Music also included profiles of Uncle Dave Macon and DeFord Bailey (Bailey was known for the way he perfected the train sound in his harmonica playing and became the first African American star in Country music).  I would know nothing about Uncle Dave Macon and DeFord Bailey but for Jon Gersh and The Dixie B-Line.

I look forward to more of this Ken Burns documentary series.  And I thank WUMB’s Scott Alarik and Jon Gersh for apparently prepping me for the first episode.

Posted by WUMB Radio at 8:57 AM No comments: